I am the only one Certified LabVIEW Associate Developer in Ukraine 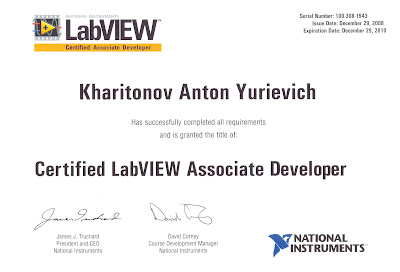 After a successful trip to Taganrog (Russia), it was decided to try luck in obtaining a Certified LabVIEW Associate Developer (CLAD) certificate. The problem was one and the most important - the lack of representative NI office in Ukraine. And nobody tried. In fact, in Ukraine I was the first.
The training center in Taganrog applied for Moscow to ask allowing to test me in Taganrog. Consent was been given.
Since I studied on my own, I was nervous, knowing that such exams repeat the training courses. However, an example of an exam taken from the Internet showed that "everything is possible."
At the appointed time, I crossed the border, and in due time I wrote the exam. I did not ask for help from the examiners, since in principle, the tasks were clear. Exam, of course, in English.
After a while I received a confirmation and a certificate. Certificate for a period of 2 years. Why such a short time? NI correctly believes that in 2 years I must to grow to a higher level CLD and pass the exam. But even if I assume that I’ll grow up on my own, it’s only worth taking the exam if I work in a highly specialized office. Expensive.
So from December 2008 to 2010 I am the only one Certified LabVIEW Associate Developer in Ukraine.